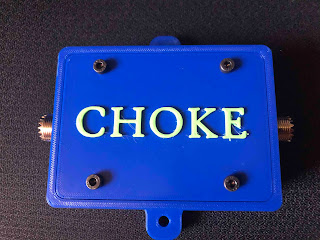 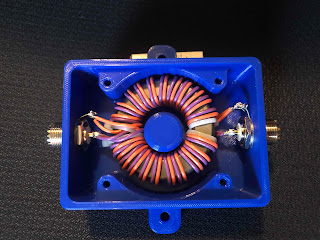 From this thingiverse page. 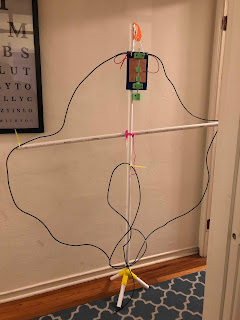 After I had a variable capacitor, I thought I'd go ahead and try my hand at a magnetic loop antenna.  This used 15 feet of RG58u I had sitting around that I wasn't going to use (as it was kind of chewed up from having been caught in a door a few times - used the good parts that were left).  Used a 3 foot length for the coupling loop.  Have the cap hanging from a hook at the top, have the coax zip-tied to it.  Using some PVC pipe I had laying around for the mast/shape, and have that one a little base I had printed for a e-drum I made at some point.
I made this for 20m, but couldn't get that to tune.  The lowest capacitance I have seems to be too much.  I might try putting in a cap in series to tune down (if I have any 500v ones sitting around).  But for now I tried 30/40m.  I was using 1W (as I wasn't sure about the voltage the cap could handle, plus I was using this in my garage...), and didn't really get anywhere on wspr on 40m (got picked up in the immediate area, but no farther).  But on 30m, did ok 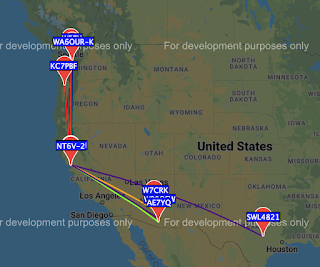 Tuning it is *hard*.  Just barely turning the knob moves the SWR dip a *lot*.
This was a fun experiment.  I don't really see using it much, but might play with it some more at some point.  Definitely felt like I learned a bit along the way.
Posted by Ben Sanders at 7:50 PM No comments: 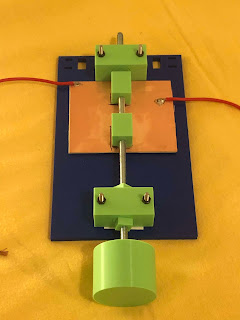 Made a variable capacitor.  Measured it as 34-164pF.  Have notes about it on the thingiverse page.

As an aside, I went to measure it with the LC100A LC Meter, and the stupid usb port snapped off.  Wasn't feeling like fixing it right now, so tried using the nanoVNA.  But wasn't getting numbers that made sense - probably didn't calibrate it well (my dummy load may be more inductive than I thought).  So was getting some other resistors together to calibrate with, and in doing so I got out my regular multimeter (as my eyes are tired).  And turns out, *it* can measure capacitance.  I never noticed that before.  It was one I got at Radio Shack for cheap when they were going out of business, and I don't think it had the manual.  Anyway, that was a win.

Posted by Ben Sanders at 8:05 PM No comments:

Had the afternoon off, so thought I would try a parks on the air activation.  Went to Rosie the Riveter WWII Home Front National Historical Park 10 minutes away.  Asked the park ranger about POTA, and she said she had just heard about it the other week for the first time - presumably when the EBARC activated it!

Used my DS-1 at first, as there is only one tree, and the park bench next to it was in use.  Managed to get a few contacts off the bat, but then started getting a lot of static.

A little while later, tried putting little EFHW up in the tree, and managed to get a few more, but needed to leave before I managed to activate it (only got seven).  But was still a beautiful day. 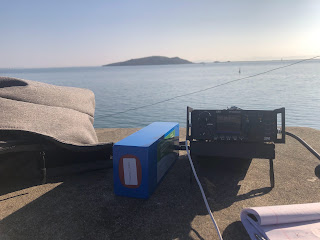 Posted by Ben Sanders at 5:27 PM No comments:

Was suggested to me yesterday on Reddit amateurradio irc to make a vertical for 20m.

Got some cheap speaker wire, a BNC connector, and 3d printed a little connector piece.

The result is here

Posted by Ben Sanders at 5:22 PM No comments:

Yesterday I took to the kids on a hike up a local hill to try setting up my new EFHW antenna on the Spiderbeam pole.  There was a lot of back and forth because I haven't set this pole up more than once or twice, and I'm still getting the hang of it.  Eventually managed it, but couldn't hear anything.  Not sure why it was so deaf - I managed to get *out* on it at home the other day on WSPR.

In any case, at the end I tried to throw up the little EFHW I had made in the past - just tied a string to the end and threw it over a 10ft high branch.  Managed to hear great on it.  However, didn't try contesting as the kids were pretty tired by that point.

Today I got up and tried again, this time in the backyard (far enough from my normal station to count as outdoors).  First I tried the DS1.  Managed to get one person on 40m after a lot of work.

Then put up my 20m dipole on the painter's pole.  Managed to work three stations before I ran out of time.

For fun, tried putting the little EFHW up on the Spiderbeam as a somewhat-vertical (I'd need a 12M to make it completely vertical).  Seems to work, but after the contest was over everyone dropped off so I wasn't able to talk to anyone.  Almost broke the pole when it started to fall over - I hadn't put the guy lines at 120 degrees from each other, and it looked like it would hold, but no.  Managed to catch it.  Lesson learned.

All in all, a great morning though.

Found a new online propagation tool, Proppy.  It is very easy to use.

Posted by Ben Sanders at 7:47 PM No comments: